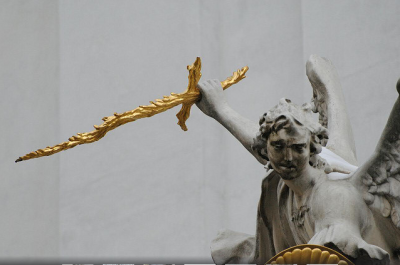 You have wondered, “what sin did I make to be in this position fighting darkness?”. You are here of your own free will. You chose to come here to rescue the masses from their own undoing. You have devoted your entire life to this cause. No matter what sin was perpetrated on you, your sword could cut through it. Although you have been attacked by darkness throughout this existence, that sword you carry within you was your protection. You just did not know it was there.

It lied within you deep within your soul. For as I created Michael, I created that sword within his soul as well. It was transferred to you at birth as your role was to be significant this lifetime. You have always known this, but you did not know for what you stood and what your ultimate goal was other than to bring forth peace on earth.

The days are numbered with this fighting and destruction you now witness. It goes on day and night within the hearts and minds of humanity as they witness brutal killings, beheadings, starvation, suffering and the like.

What you don’t know is the behind the scenes efforts that has been going on as well as some of the truth in nature. What I want to say here is significant to your role at large. The role you have chosen for yourself this lifetime is to fight the darkness and its undoing to humanity since its inception here on earth. What you don’t know is how this role specifically applies to you.

It is true that Michael was significant in the role of denying the fallen angels access to heaven any longer. That is a well-known fact. The truth behind that however, is this:

I chose Lucifer for a specific assignment to come to earth to assist mankind in moving forward. He denounced that role saying it was beneath him. He was to bring light to the situation. This planet was created in a way to allow its inhabitants to learn about the separation from me and its benefits of remaining in tact. Until you know what you are not, you can’t know who you are. Comparison is not a bad thing as it can help you notice. You notice what works and what doesn’t. You notice who you are and who you are not. It is the judgment that makes the difference. Judging yourself or others as wrong has often caused much undoing here.

There was a lot of dissension over this idea. You, Faith, did not see the end result as going to be a good one. It was you who told XXXXX that you didn’t think the idea a solid one and asked that she convey that message to me. He did not. He withheld that idea because he did not believe you. He resented you for it. Because he was part of the planning committee from the beginning. He had a vested interesest in the outcome. It was his arrogance that was the undoing. His role in history was significant as was yours. The group gathered by Lucifer were determining best tactics to this venture. They began by undermining me and the intention to find a fair way for this to unfold. Total separation from me or just partial. How long would someone go separate from me in that state of denial to notice the difference and benefits of our oneness.That separation caused the undoing of humanity. However, it was the influence of Lucifer who made it worse than necessary to prove this experiment.

The fall predated Adam and Eve. Adam and Eve’s role was to introduce to humanity the God or Christ Consciousness. The humanity who predated them were ruthless barbarians.

You have one thing to ask yourself. Why am I here? To save the world from this undoing. No matter what we have done to date, no one could change the hearts and minds of humanity with the darkness run rampant through people’s veins. They could not see truth for the truth was blocked. It was hidden behind countless curses, misinformation, and misdeeds that undermined humanity from ever knowing me. Until things on the causal level were removed, people could not see truth. It was time to end this experiment. To end it, we had to lift the veil. To lift the veil, we had to lift the curse. We had to clear the undoing of Lucifer and his troops. Satan was one of his followers. Satan felt inferior and now felt purposeful as part of Lucifer’s crew.

As it was Michael’s job to banish them from heaven, he held much guilt for what he saw unfold here on earth. This experiment ended up in terror. What was supposed to be a simple exercise became the undoing of this world at large. At no time when we tried to inspire humanity through the good works of lightworkers of any age, they couldn’t always get their messages through due to the likes of the efforts of Satan and Lucifer to undermine those messages of light. If you were of the light, you became their target. Their anger toward me wreaked havoc on everything they touched.

They wanted control and power and to undermine any effort on my part to bring forth peace and oneness. What they felt I deprived them of, they would now deprive you, my other creations. What they did not realize, was this decision was to be temporary of nature. They were not to be banished here for an eternity to never return home to me. They took it as a final determination and in their feelings of powerlessness over me decided to become powerful in the way in which they could – becoming powerful over others and that which they could create on their own.