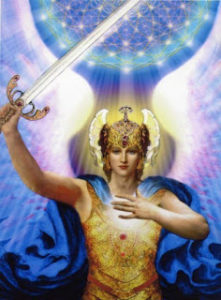 Archangel Michael was created at the beginning of time to be the Protector of God’s purpose, empire, and position. “I fiercely protect God and all of His creations. I am depicted by and by , each of which serves a purpose. They are not just ornamentation,” says Michael.

He has been written about in Jewish, Muslim and Christian texts.

The reason that Archangel Michael is working with humanity at this time is to help alleviate the numerous challenges being faced. It is his goal to overcome the karma and negativity affecting this planet.

It was also time to clear the karma of the fallen angels and for him to heal the rift between him and Lucifer, created from the time when he threw Lucifer and his followers out of heaven causing their famous fall to earth. That rift has been healed.

It is time for the planet to return to the light. It has been run by darkness for eons. The more light, the more darkness stepped in to sabotage those efforts. Archangel Michael can be called upon for those times when feeling the need to be protected. He brings his sword, which he uses to both , as well as heal. He works quickly cutting away the old and all that doesn’t work setting all in the situation free.

In 2004, he announced himself to Joy Pedersen telling her she was him incarnate. At that time, he asked her to work with him in a healing practice as well as asked her to write his book. That book became Wisdom of the Guardian: Treasures From Archangel Michael to Change Your Life. He is dictating a second book, Wisdom of the Guardian: From Dark to Light. However, his primary focus with Joy has been to heal the cause of karma negatively affecting humanity to bring forth peace on E.