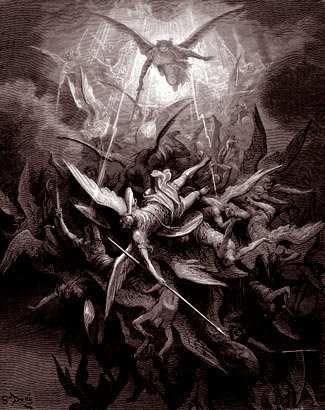 When one thinks they are better than God, they fall from grace. Lucifer thought he knew more than God. He thought he could do better and had a better idea than following God. God did not like the arrogance Lucifer displayed. He decided that Lucifer and his colleagues and followers were better off living out their existence elsewhere as to not contaminate the hearts and minds of their fellow angels. They were a corrupt bunch. They were manipulative and arrogant. That got them into trouble.

But, the trouble did not just start and end there. Those who became the descendants of those fallen angels carry within them the grid of their thinking. That thinking grid has been embedded on mankind for centuries. One of the reasons you have so much intellectualism here is that the fallen angels embedded and empowered that intellectualism so that became the predominant feature of a human being. The mind became the treasured feature over the heart.

As mankind moved away from its heart center, it moved more and more away from God. God resides and is connected to you through your heart center. The farther you moved away from the heart center and God, the more problems occurred. There were no longer the access to the answers wanted which caused people to have to think for themselves. They had to solve their own problems. Thinking began the course of action taken to solve problems when originally all they had to do was ask. Everyone had equal opportunity and connection to God to ask and receive the answers. Now that mankind has moved so far away from God, it has been more of a challenge to reconnect and get the answers desired.

When someone connects to their heart center and communicates to God through there instead of their intellectual mind, they can better receive the guidance they desire.

Those who were descendants of the fallen angels also carry much regret. They are victims of their own arrogance and innocence of a time long ago, but they reap the affect of those decisions back them. Karma isn’t an easy thing to always diagnose. Many miss the elements within them to clear because they forget the ancestral connections that are prevalent. You see society has been affected by the mistakes of that time in more ways than one. All of society is different because of this arrogance. Clearing with arrogance on a regular basis is useful to all.

The time of Lucifer is drawing to an end. He and his powers, his arrogance and ways of being are on their way out. It will be gradual at first but one day there will be a mass separation between the old and new ways. The new ways will emerge with ease like a light beginning to brighten. The warmth from that light will begin to light up the hearts and minds of mankind restoring them to their full glory as one with God, their Source.

Right now they are still separated and their hearts and minds are struggling with what is these days. They don’t know which end is up. They are wondering why things are not working out so well. Part of the problem is they are trying to get rid of old ways but are still resisting the new ways. They don’t yet know how to embrace the new ways. Until they open their hearts and minds to receiving the new ways － the light － into their lives, they will struggle. All they need do is let go. I know easier said than done but that too is a decision and a choice. Let go of the old ways and embrace the new ways. Allow the new light and ways to emerge and take a hold and shake out the old. Let go of the past and embrace the new.

The new universe will be so beautiful, so prosperous, so loving and so rewarding people will wonder why they resisted for as long as they have. But, they did, because these old holds on them are programmed into their grid of existence to permeate and strengthen the ego. Letting go of the ego isn’t an easy feat. It is one of the trickiest and hardest things to do.

Let go and let God. But, no. People prefer to control because they do not trust God. They do not believe God really exists or has the power to change their existence. If they do believe that a possibility, they don’t believe they are worthy to receive the changes. They are still stuck in their guilt for going against God. That guilt permeates mankind and sticks up everything.