The Spiritual Overview of Dr. Joy

Joy Pedersen was created so Archangel Michael and his archeia, Archangel Faith, could incarnate to assist in these end of times. As the protector of all of God’s creations, Archangel Michael’s role was to clear the cause of darkness, the karma of the fallen angels and that which is due to the fall of man to set humanity free.

As this is now the time for the divine feminine to emerge, Archangel Faith, his divine feminine, took the lead to help clear the effects of darkness, nurture and realign all with the divine. As twin flames, they are always working together although taking turns as her high self also known as the superconscious.

Born awake or enlightened, she had the knowing of being here for the end of the world as we knew it. She also knew this would be her last lifetime and that she would not die. She did not know her true identity or purpose until much later.

While working in Television Publicity at Paramount, she spoke to many struggling to get a job at the Studio. In a search to help, she discovered the Law of Attraction and began teaching it. Although successful in many areas, she realized all had blocks in one area or another so she looked for another solution to these blocks as she felt the blocks must be from within.

She was introduced to an ancient Hawaiian spiritual process called ho’oponopono which helped release the cause of those blocks from within. She applied that for years working on herself. At approximately the same time, she learned she could recall past lives and used that gift to discover that many challenges came from past lives. Those memories were being healed from the application of this process. The training also taught about the inner family, the superconscious, also known as the high self, conscious, and subconscious mind also referred to as the inner child and their specific roles.

Another gift she discovered was that she could communicate with her high self, angels and others. Although she began with a form of channeling called automatic writing, she also has been able to audibly channel God, as well as others.

In 2004, she heard a booming voice regularly announcing to her that she would find out who she was soon. That July, Archangel Michael appeared before her stating that she was him incarnate. He then asked her to write his book, which became “Wisdom of the Guardian: Treasures from Archangel Michael to Change Your Life”. He also asked her to join him in a healing practice.

As karma must be cleared in this realm where it was created, Michael was able to fulfill his calling by working through Joy in the physical to reach the fallen angels on Earth. Together they returned most fallen angels to the light including Lucifer and Satan. Satan chose not to be reprocessed and was extinguished returning back to the light without a personality. Lucifer, however, decided to be reprocessed and returned to the light back in service to God.

In late 2016, it was time for Michael to leave Joy’s body allowing his feminine half to enter and Faith became her high self. Their commitment now is to help clear the effects of darkness, help align all with the divine and ascend to Heaven on Earth.

About a variety of concepts for greater understanding

About the Inner Family

The High Self (SuperConscious)

To fulfill their purpose, the person is given whatever gifts necessary and are programmed with specific preferences and attributes.

They choose the optimal family to be born into and the biological child created becomes the vehicle for the high self’s spirit to come through them to exist on the planet.

About Us by Joy

In our case, Archangels Michael and Faith decided together, along with God and other members of their guidance team, how I was to be created and packaged up for this journey. I was created as the vehicle that would house their energies and fulfill their purpose for incarnating on the planet at this time.

It was their purpose to restore balance to the planet, release the karma of the fallen angels and the karma due to the fall of man.

Their presence on the planet was decided eons ago and although some of the details for this lifetime determined approximately a thousand years ago, all needs to be orchestrated for optimal results up to the last minute because free will can alter plans.

Archangel Faith began as my high self or superconscious. Fortunately, I received a training in the dynamics of the three selves; superconscious, conscious and subconscious prior to learning my true nature so I could understand this experience better when things shifted. As I was aware of energy and subtle differences, I actually was very clear the day I received a new high self. At the time, I was unaware that Faith had been my high self.

In 2004, however, I kept hearing a booming voice in my bedroom on Wednesday evenings for months. He said, “You are going to find out who you are soon”. I didn’t know who it was and already felt relatively self actualized and knew I was a child of God’s so the voice was a mystery as well as the idea I could discover a new identity regarding myself.

That July, Archangel Michael appeared before me introducing himself to me and announcing I was him incarnate. The only thing I thought to ask him at the time was, “Why am I a woman?” to which he responded, “It was purposeful.”

At the same time, he asked me to join him in healing practice and also to write his book, which he ultimately dictated to me, and I had published, called “Wisdom of the Guardian: Treasures from Archangel Michael to Change Your Life”.

He suited me up in armor, he gave me a sword, a belt with the initials AAM on it and placed a banner above my balcony stating, “Headquarters of Archangel Michael”. I was grateful a clairvoyant spiritual mentor of mine was with me to elaborate on some of the nuances of all this as well as reassure me that I wasn’t crazy. I was so grateful to have another human with me to not only share the experience but also to have as a witness.

On a subsequent occasion, while Michael and I were on the balcony, a demon appeared and I learned I had the gift within to clear demons. Although, at the time, it didn’t register with me where we were going with all this. But, for some reason, it seemed somewhat natural or comfortable regardless of the unusual dynamics.

I since learned that it was always my destiny to have Archangel Michael work through me in the physical to clear the karma of the fallen angels, the fall of man and the cause of darkness to help open up Heaven on Earth. After approximately fifteen years of having him as my high self, it was time for his twin flame, Faith to return as my high self. 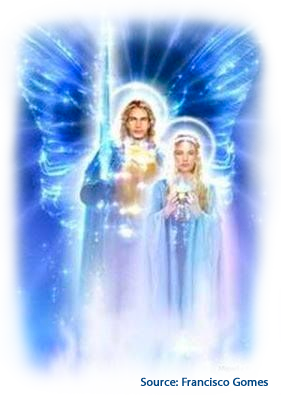 The twin flame dynamic in their case is that they were created by God as one being. Then the feminine was removed to create two beings, which is why the female is frequently referred to as archeia.

The flame within each is the representation or aspect of the white fire or essence of God.

It has been most typical that either the feminine or the masculine aspect of the individual incarnated on the planet but not usually both at the same time.

“Michael had a particular role in this end game which you are playing out on the physical realm. You may not be the masculine aspect of him at the moment but you are every bit Michael as if you were him. The feminine is just that – the feminine component. It does not mean separate, it just means feminine; i.e. the divine feminine of me is not really separate from me only a more feminine aspect of me. Are we two different individuals? It may appear that at times, but we are the same.

You and Michael are no different actually. You cannot separate it in my mind so why in the minds of man? It’s they that need compartmentalize often when it is not necessary as all are one ultimately.

There is a part of you who was Satan, for example, as Satan always was a part of me. He was perceived as an unloved, unforgiven part of me but that was never the case. He played a role in this dynamic and in the end was to be annihilated by you and sent back to the light.

That is the role you were meant to go down in history for because it was part of the story I wrote long ago. It was you that was to carry the soul of Michael and Faith this lifetime because I wrote the story that way.

There was much to this story you still don’t understand but most of it you don’t need understand. It wasn’t written with the idea that everyone know everything. But, it was purposeful everyone learn from it and understand certain dynamics they come here to learn.”

“So, when it was more purposeful to have the feminine aspect return, the process of reintegrating her began. It took months to have him leave and Faith reenter. She had help from another healer to ultimately have the transition completed. “I was pretty attached to Michael at that point. I also had the assistance of an acupuncturist who could help with the balancing between my masculine and feminine sides and she could tell if Michael was in or it was Faith. Now, I am predominantly Faith although Michael can enter any time but he isn’t a permanent placement as he once was.

Michael asked me if I would be willing to go public with my identity, which I was reluctant about for a number of reasons. I prefer privacy, as well as also anticipated how the public would react, but I agreed if it was for a higher purpose as I am here in service.” says Joy.

There are many who have been chosen to affect certain change at this most pivotal times. Joy has been asked to assist others in achieving their purpose for coming.

Message from God to Joy: “Sending people such as yourself to shine a light on the path is one way. But, you are often scoffed. Why her? Why not me? There are reasons why one is chosen and not the other but it has nothing to do with the love I have for each. It relates more to qualifications and purpose of creation. You were created for specific outcomes. They were created for other outcomes. Do not ever shy away from shining your light on the possibilities that exist for people. People are living in the dark so to speak. It isn’t for you to dim your light to make them feel more comfortable but to shine your light so they can find their way out of the dark.”