Jesus on Story of Abraham and Isaac 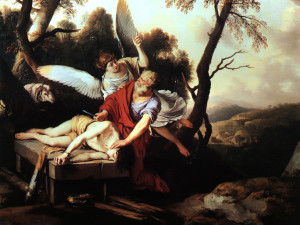 The Story of Abraham and Isaac

After clearing the story of Abraham and Isaac in a spiritual-healing session on March 25, 2013, I asked Jesus for confirmation of the discover that Darkness was operating behind the scene. You can read that history here. The following is the answer Jesus gave me:

It was common for people to sacrifice something to the gods, their idols, at this time in history. It was a time of great upheaval, control, and terror. People were controlled by the superstitions placed upon them.

However, Abraham stood out in the crowd as someone who went within and touched that part of him that connected him to his God Source. Because of that, he was able to receive his divine guidance. That divine guidance set him apart. He became someone to contend with because he began to question that which those in authority were telling him. He didn’t automatically succumb to the terrors and ideas placed upon him. He realized his truth, and his truth set him free. He no longer had to succumb to the tyranny of the times. He became an independent thinker. It was that independent thinking that they had to control and manage. It brought terror to the hearts and minds of those in power because Abraham was beginning to teach that which he was learning from his direct connection to Source. He was eager to share his insights. Dark forces, therefore, had to take matters into their own hands.

He was devout in his adherence to the guidance he received. He, therefore, made an example of himself as to what he received and followed. He did so diligently. What darkness did was create the whole story about Isaac so people could see how terrible the possibility of following God might be. If he could ask someone to kill his son, maybe he could go through with it. It was a harrowing story for all. This story terrorized the masses throughout eternity.

It is now ready to be cleared to set yourself free, and all those who have doubts about following God will no longer feel terrorized, questioning what it will be that God will expect of them to do. What if God asks them to do something challenging such as this? What if they cannot measure up, fulfill what they have been asked, and then worry about what punishment will befall them in response to their weakness and inability to follow through on the task at hand. This state of terror lies within you all in one way or another. This incident is ready to come off, and that is one of the reasons we are here. This significant event has been holding back humanity from embracing God at this time. We wish to clear this to have freedom around the subject of following God.

Once this fear is released, all will feel free to choose without the threats of tyranny.

Following this post, I asked God directly to comment on the story of Abraham and Isaac. I shared his response here.