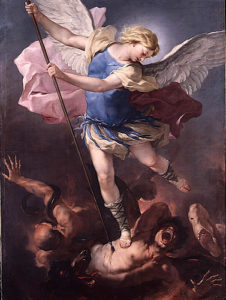 In the winter months of 2004, I began hearing a booming voice in my bedroom at night. He stated, “You are going to find out who you are soon.” I found this disconcerting, as well as curious. I finally found out who I was when Archangel Michael stood before me explaining I was him incarnate. He asked me to write his book. I asked him how many chapters it would be. He said twenty-two. He also asked me to join him in a healing practice. I agreed to both. I had already been using a spiritual healing process since 1986, but I hadn’t created a formalized practice until Michael asked me to join him. I didn’t hesitate, nor did I think to ask anything else except, “Why am I a woman?” Michael responded, “It is purposeful.” 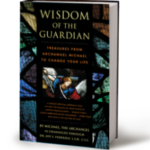 Shortly, thereafter, I felt inspired, began writing, and eventually published, “Wisdom of the Guardian: Treasures from Archangel Michael to Change Your Life.” Although I had been receiving messages from God, angels, and others since 1994 through automatic writing, I still didn’t feel comfortable sharing that fact with anyone. Until Michael gave me his book, I would have continued keeping that a secret, thinking no one would believe me.

I transitioned my business into a spiritual healing practice and made my first public announcement at a business networking event I hosted. The audience consisted mostly of men, and I assumed that once I came out with this news, I would lose their attendance—instead, I gained several clients. The business steadily grew. I was invited to speak about the book. Michael instructed me which subjects to discuss for each specific audience knowing exactly what they needed to hear before they came.

While working over the phone with clients, I began to realize I had certain intuitive and healing gifts. As I already knew I could recall my own past lives, I began to notice I could also see those of my clients. Over time, I began to realize that my clients all seemed to be old souls with a high purpose and who possessed gifts of their own. I helped these clients identify the hidden causes of challenges that were blocking their full self-expression. During many of those sessions, significant and sometimes historic lifetimes came up to be addressed.

On the phone with my eyes closed, I would be able to travel back in time and see Biblical stories, the creation of Christianity, the problems that occurred in Heaven with Lucifer and Satan (yes, they are two separate individuals), and back to the discovery of the Prince of Darkness. The majority of stories seemed to pertain to both Jewish and Christian histories. As I identified various stories, I cleared them using spiritual healing. Eventually, I learned that my true calling was to clear the karma created by the fallen angels.

On a daily basis, I heard and dealt with story upon story regarding the causal level of darkness. When Michael first appeared to me, he suited me up with his sword and a belt with the letters AAM on it that were not visible to the naked eye. I had no idea I was going to actually have to use them. Michael kept our specific plans for the future to himself.

In the early days of my working with Michael, a demon appeared on my balcony and I got rid of it while Michael just stood there. I was annoyed that he didn’t budge. I even snipped at him, “Wasn’t that your job?” I had no idea that Michael intended that as a lesson so that I would realize that I had the power within me to eliminate a demon with relative ease.

At the time, I was grateful I had a spiritual colleague with me who witnessed these events. Now I am grateful I am alive to share them.

On many occasions, the work was harrowing. I ended up doing thousands of exorcisms over the years. I discovered, when accessing darkness from within someone’s past, that I would feel like I was under anesthesia. I later learned that I could have lost consciousness on those occasions and died.

The most significant events, however, occurred when I was asked to get on a plane and go to Los Angeles in 2012. I had no idea I was to confront the man who carried the soul of Lucifer. I ended up delivering a message from God, telling this man/Lucifer, that he was forgiven, and inviting him to join us in the light. Eventually he did, and I was told that the rift between Michael and Lucifer was finally healed.

During the days leading up to Holy Week, 2013, patterns began to develop. People were calling me saying, “God or Michael said I needed to work with you now.” Or, “I got in meditation that I had to call you.” There were too many of these instances to not notice the synchronicity. I began noticing that each clearing session started taking on a new depth and flavor, as well.

Holy Week began with our clearing martyrdom and the story of Abraham and Isaac. We discovered that it was really Satan who instructed Abraham to sacrifice his son. I have since confirmed this information with several sources. On Wednesday of Holy Week, Michael instructed me to schedule session with a particular client in order to work on oppression. I opened the channeled session and reported to my client seeing a large hole being drilled into the center of the Earth. Then something like a straw was placed within it. The circumference was surrounded by the 12 Tribes of Israel and a funnel of angels. Liquid light was poured down the straw and I watched as darkness came up and through the funnel of angels.

The next morning, I opened a session where I was given a new Tree of Life in the form of a sapling. Afterward, I was asked to schedule a meeting on Saturday with a couple who were my clients to buy a new watch. Michael gave me instruction to have the wife get us a table at Whole Foods and buy water and apple cider with which to make the toast. The combination was a spiritual process that balanced the  masculine and feminine. I was told that we could not buy the watch until after 12.

Thursday afternoon we cleared suffering and the story of Adam and Eve. I audibly channeled both Eve and God following that clearing. The next morning, Good Friday, completed the healings for the week by clearing the serpent energy.

Saturday morning, I received the toast for that day’s ceremony at Whole Foods, which was in the same mall where we were instructed to b 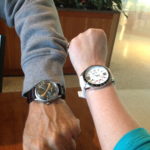 uy the watches. The husband and I picked out watches before noon and were on line purchasing them at 12:01. We met his wife at a table at Whole Foods. I asked Michael what time we should do the toast, and I was told we should do it at 12:12. At that time, we toasted with the apple cider and water combination to the words, “Aligned with the divine for a new beginning.”

After chatting, the couple and I went our separate ways. As I reached the parking lot, I saw streams of light, reminiscent of paper streamers coming down from the sky and I heard the words, “Today is the first day of Heaven on Earth.” The wife called me that night to tell me that the date, March 30, 2013, added up to 12. Therefore, at 12:12:12, we heralded in the first day of Heaven on Earth.

I was reminded that when in Los Angeles the fall of 2012, Michael asked me to go to Las Vegas. At the time, he told me that if I went there, I would help write the last chapter of the Book of Life and release a lot of people from Hell. At the time, Michael showed me two books, one with only one chapter remaining to be written, and the other book with only several chapters already written.

I went to Las Vegas not knowing what to expect. At a business conference, just before 12 on 12:12, I heard Michael state that the last chapter was written and the book was closed. When I looked at my watch, it had stopped and was never able to start it again. That black watch remains dormant to this day, replaced by a white watch purchased at Century 21 that same pivotal day.

On Easter Sunday, Michael announced, “the Earth has ascended”. On Monday, I heard God state, “I now own the world.”

It was Michael and my goal to turn as many souls to the light as possible before one of the planned shifts occurred in August, 2013. Although it appeared we had achieved the success we sought, in August Michael announced that we had to do battle with Satan, as his whereabouts had been discovered. I was instructed to prepare for a clearing we would do at noon that Saturday. Along with the Army of God, I opened a channeled session and the battle began. Apparently, this was a surprise attack and we were successful. I am grateful for the Army of God for their participation when dealing with any significant case of darkness.

It has been a journey and a privilege to successfully clear the cause of darkness while working along with Archangel Michael. Upon being guided to move to Florida to continue that journey here, I learned that I was actually Michael’s twin flame, Faith. Because I share his soul as his other half, it enabled him to work through me on this most purposeful mission. Now that this battle has been won, my energies are more balanced. I can actually feel when Michael is in my body, versus when the female side becomes more prominent. Now, that the heavy lifting has been done, it is time for all to have faith restored in a positive future for all.

As we continue to shift from a world owned and run by darkness to one in the light and once again in God’s hands, I look forward to continuing this journey, clearing the effects of darkness on humanity so that no one suffers again from the oppression of this previous regime.

Note: For the more comprehensive version of the story, read the best seller, “Clear Your Past and Change Your Future”.